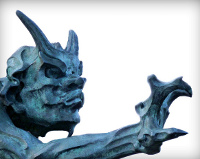 I posted recently about my experiences shifting to systemd and how I found it, for all three of my Arch machines, to be a relatively simple and straightforward process which, in the intervening weeks, has borne out the views of the developers and other members of the community who have been using it for a longer period—it works, and works well. At the start of this week, Stéphane Gaudreault announced on Arch-dev-public the intention to replace the original initscripts with systemd.

The reaction by some to this announcement was, to me, quite disappointing. My view of open source communities is that by participating you are entering into a social contract. That contract is that, as you are reliant on the goodwill of the wider community it is incumbent on you to ensure that your overall contribution—in whatever form—brings more to the community than it takes away. At the very least, you can strive to ensure that it is a value neutral exchange.

Sadly, for some of the trolls on the MLs, that is patently not the case. I want to take a closer look at just one of those threads, for two reasons. First, it is a textbook case of a particularly pernicious troll. And second, in conjunction with some other factors, it had an especially damaging effect on the wider community.

The thread in question is on Arch-general, the largest of the mailing lists. It has the suitably alarmist title Think twice before moving to systemd. The troll, who has had only minimal involvement with the Arch community up until this unfortunate moment starts by framing his “concern”1:

I just became aware that Arch Linux plans to switch to systemd, and this worries me for several reasons.

Felipe is worried. Ergo, we should be worried. Why should we be worried? Because, despite the fact that systemd has been discussed and used by Archers since the middle of 2010, it has just come to his attention and now, with the formidable powers of his intellect, he has detected a disturbance in the force.

I tried systemd a while ago in a brand new machine with Arch Linux and the boot was *much slower*. After some exchanges with Lennart Poettering and other people in Google+[1], it became clear I was on my own. Eventually I found the culprit: Fedora uses CONFIG_HZ_1000, and Arch Linux uses CONFIG_HZ_300. It became clear to me that systemd was not ready for prime time, it wasn't thoroughly tested in a lot of machines, and if you have problems Lennart Poettering will blame you (PulseAudio sounds familiar?).

The salient phrases here are “it became clear I was on my own” and the even more telling, “it became clear to me that systemd was not ready for prime time.” Once I had managed to wipe away the tears of gratitude that were coursing down my cheeks, I realized that Arch finally had finally found what it had been missing for all these years: a saviour. We were going to be OK after all.

Felipe has “found the culprit.” Despite the best efforts of the Arch developers, upstream, the other distros that have been using it for considerably longer, and the experience of the Arch users reported on our boards, no-one had the heroic ability to see through to the heart of this conundrum and expose systemd for the fraud that it is.

But our gratitude should be tempered with some shame for we, the Arch community, have let Felipe down. We haven’t lived up to the standards he expects of us. As he gently admonishes us: “I was expecting more from the Arch Linux community.” Yes, Felipe, and you were right to. We let you down; can you forgive us?

The thread goes on to generate more than 50 replies. All of them wasted. His trolling is not interested in facts, in reason or logic; his method of argumentation is not rational, and he is not interested in working toward an understanding of the truth; he just wants to be right. At whatever cost to the wider community. These posts, and trolls in other fora like this one,2 are really about gratifying Felipe’s own voracious appetite for self-aggrandisement. In reality, of course, it is a stunning illustration of the Dunning-Kruger effect. It would be pathetic if it were a victimless pursuit; but it is not.

Further down in the thread we see the inevitable frustration of the developer who leads this work for Arch, Tom Gunderson, finally boil over. This precipitates another thread where Tom announces that he will no longer participate in this list. This is from the developer that has patiently and constructively engaged with Arch users on the list around this issue for the past several months. On his own time.

That is the impact of trolls like Felipe. That is a direct effect of his selfishness on the wider community. What has he brought to the community? Dissent, distraction and posturing. What has he taken away? The ability for all of us to engage with one of the developers of the software we all use. His presence on the list, and that of a few others, has been nothing short of corrosive.

And as for the smoking gun, the config setting that no-one was smart enough to discover? Denis A. Altoé Falqueto went to the trouble to build another kernel and run a test and, contrary to Felipe who provided no such evidence, posted the results. You can guess the outcome.

Creative Commons image of the troll on Flickr by Comrade Foot.