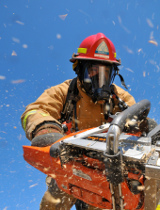 I posted a couple of weeks ago about Building Vim and how, using ABS and makepkg it is possible to customize packages in the repositories to suit your individual requirements, in that case with a specific feature set.

One of Arch’s real strengths is in the flexibility that makepkg and PKGBUILDs provide the community; the ability to adapt official packages—or unofficial ones in the AUR—as you see fit. As PKGBUILDs are just shell scripts, the entry level to start playing around with them is quite low1.

A fairly standard, and simple, example of the type of customization that I might make is with dmenu, the suckless dynamic menu, where the standard package in the Arch repositories is not patched for Xft support. There is a patch for this on the suckless wiki, so it is just a case of making the requisite changes in the PKGBUILD from ABS and building it.

As you can see from the diff below, there is not a lot involved in this exercize; essentially, adding libxft as a dependency, sourcing the patch from the suckless site (and including the hash for it), and then in the build function ensuring that the patch is applied and the Makefile updated with the new library:

Running makepkg -i will build and install dmenu with Xft support. This is the most straightforward approach. I also, primarily by way of experimentation and in an effort to try an understand how this actually works, have slightly more convoluted examples. msmtp, the SMTP client has a couple of makedepends in libgnome-keyring and texlive-core; the former I have zero use for and the latter is only installed on my desktop, so I have no wish to install it on my laptop just to be able to send emails…

In this case, I modified the PKGBUILD to completely remove the libgnome-keyring dependency and to only build the msmtp documentation in .pdf and .html if texlive-core was already installed on the machine. Unfortunately, I wasn’t able to test for the presence of texlive-core with the standard utilities like type or which, so—as it is installed on all my boxes—I went with expac (pacman -Q would also work):

It isn’t necessarily an attractive solution, but it works for me… On the subject of unattractive solutions, as of pacman 4.1, released last month, the packaging standards for VCS PKGBUILDs have been changed, principally around how sources and versioning is handled. For the couple of VCS packages I maintain in the AUR2, I have been experimenting with how to capture the pkgver in a way that conforms to the standards and provides people with a meaningful version number.

By default, the version number for these projects from their git repos is not that helpful:

After looking through the git logs, and playing around with awk to filter the results, I came up with this:

This prints a more, for me anyway, intelligble package version: vimprobable2-git 1.2.1_c5936cc-1 that relates back to the last stable release and appends the current commit. I’m sure that this could be improved upon; suggestions are welcome.

The other change to note in all of these PKGBUILDs is the inclusion of the groups variable. By adding all of the modified packages from the official repositories to the—imaginatively titled—modified group, I can then add a line to /etc/pacman.conf that prevents those packages from being overwritten on upgrade3:

Issuing pacman -Syu, or running checkupdates from a cron job, will notify you that the packages have had a version bump and that they need to be rebuilt. The PKGBUILDs for all of these packages can be found in my bitbucket repo.