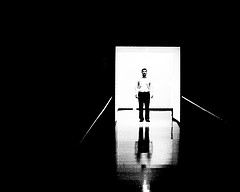 After eight years as a bureaucrat1 working in a central agency in New Zealand’s public service, I have hung up the grey cardigan.

While I am sure that I will never shed some of the qualities of being an official (think discretion and a belief in the importance of sound governance—rather than a keen ear for the rattle of the tea trolley), I am looking forward to the opportunity to stretch out a little2.

When I first joined the Commission, it was to work in the E-government Unit. I was strongly attracted to a role that combined communications and technology and, at the time, the EGU was the epicentre of a huge amount of really interesting initiatives. The Open Source Policy, the Authentication Framework, work on Digital Rights Management and security to name just a few; it was a geek’s paradise (certainly from a policy perspective).

I have no doubt that the foundation of much of what I was later able to achieve was fostered in this environment; whether it was originally making the code available for the e-government website, blogging about social media in the public sector, working with the other public service communications managers on the Review of the Function, or issuing the RFP for the rebuild of the SSC website with the stipulation that the solution had to be open source so that we could reuse it across government.

You can probably see a theme emerging here. If you have read this blog at all, you will definitely see where this is heading…

Anyway, I am about to start focussing on technology—and open source technology in particular—on a full time basis. From the middle of this month, I join the team at Catalyst, New Zealand’s leading open source company, where I will be the newly minted Strategy and Relations Manager.

I’m thrilled to be able to work for a company that is dedicated to driving the uptake of open source by businesses and government. Both the private and public sectors around the world are really starting to grasp the strategic and economic benefits of using open source; we are going to be doing our best to accelerate that adoption.