I joined Quora early in the new year and, while the hype has in no way abated, I have found that increasingly over the months that I have been visiting, there is less and less reason for me to return on any regular basis. And this puzzles me as I think the concept is, for me, an attractive one.

In the five-odd months I have been visiting the site, I have managed to contribute 58 answers and over one hundred edits (more on that below); this strikes me as a reasonable commitment on my part and one that should return some dividend to me – at least in terms of satisfaction with the site. Alas, no.

And why not? For several reasons. And reasons that have only really become apparent over the last month as I started to spend time on the Unix & Linux Stack Exchange site. The contrast between the experience of the two sites, that are in essence very similar, couldn’t be more striking.

The primary difference between the two is that Unix.SE isn’t a social site: you don’t follow anyone. Which, when you think about Q&A sites, makes a lot more sense than Quora’s model. I still don’t understand the point of following people on Quora. Perhaps I am not following enough people, or the wrong ones, but I have yet to see any benefit in following on the site.

One other area of seeming similarity between the sites is the ability to vote up (or down) questions and answers. On Unix.SE, this is implemented as a real strength as these votes determine contributor’s reputation, described thus:

Reputation is a rough measurement of how much the community trusts you. Reputation is never given, it is earned by convincing fellow users that you know what you’re talking about.

This has a twofold effect: it motivates contributors to provide quality answers (and rewards them when they do), and more importantly, gives you a heuristic for how credible an answer may be. Quora doesn’t have this concept and, for me, is much the poorer for it.

Reputation has consequences on Unix.SE: the more you accrue, the more privileges on the site you are granted. Again, this builds the community’s capability while encouraging individual contributors.

Some of the other areas where Quora is really left wanting in comparison to Unix.SE are around the design of the site. The text box where you enter your answers or edits is a case in point: 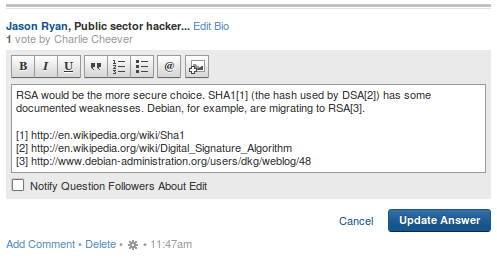 On Quora, it is like trying to change a car battery through a letterbox. The single, overriding impression is that entering information into the site is neither a priority nor pleasurable which, for a site aspiring to be a knowledge repository is incredibly perverse.

This is compounded by the fact that the tools for presenting the information that you want to add to the site can charitably be described as rudimentary (one of the reasons that I have 100-odd edits is that it takes at least two to three attempts to present information in a semi-acceptable fashion). Searching for “quora markup tools” is as disappointing as it is frustrating.

Being able to present information appropriately is critical. The StackExchange sites allow all sorts of HTML tags and markdown, without apparently any additional XSS risk1. The result is questions and answers that are formatted in a way that enhances their legibility, rather than detracting from it.

There are some other areas where Quora is not measuring up for me: opaque editorial and moderation policies and practices and an unwillingness to more actively curate the questions – and no, those two statements are not contradictory.

The overall impression I am left with is that while both sites have similar aims (albeit Unix.SE’s is much more specific in terms of the subject matter), Quora seems to me to be really failing at building a community around it. Unless, of course, you count social media experts…